Water is Fundamental to Life

Are You Ready to Take Control of Your Health?

Water is the most abundant substance on the planet and is fundamental to all life.  Our bodies are composed mostly of water. It is necessary for many physiological and biochemical processes in the body as well as detoxification and waste removal. Why then have we strayed so far from having healthy drinking water? Conventional water treatment mechanically and chemically damages our water. Could this be one of the root causes of our modern health crisis?

Ancient wisdom referred to natural water as ‘Living Water’ and understood it’s life giving qualities. Water in pristine nature is pure, energized and rich in minerals. It flows in spirals, cleansing itself and generating electromagnetic energy, which is inherent in all living things. As rain falls it generates electricity which then gives the electrical energy to the plants. Did you ever notice how much better your garden responds to rain than water from a garden hose? Or how clean the air smells after a rain storm.

Viktor Shauberger was an Austrian Naturalist and inventor who is being rediscovered and studied by scientists today. He found that water moving naturally in a river or stream is generating electricity. But when the same water is directed into a straight trough, it quickly becomes ‘dead water’ with little electrical charge. Viktor said, “Copy and Comprehend Nature.”

How To Create Your Own Structured Water 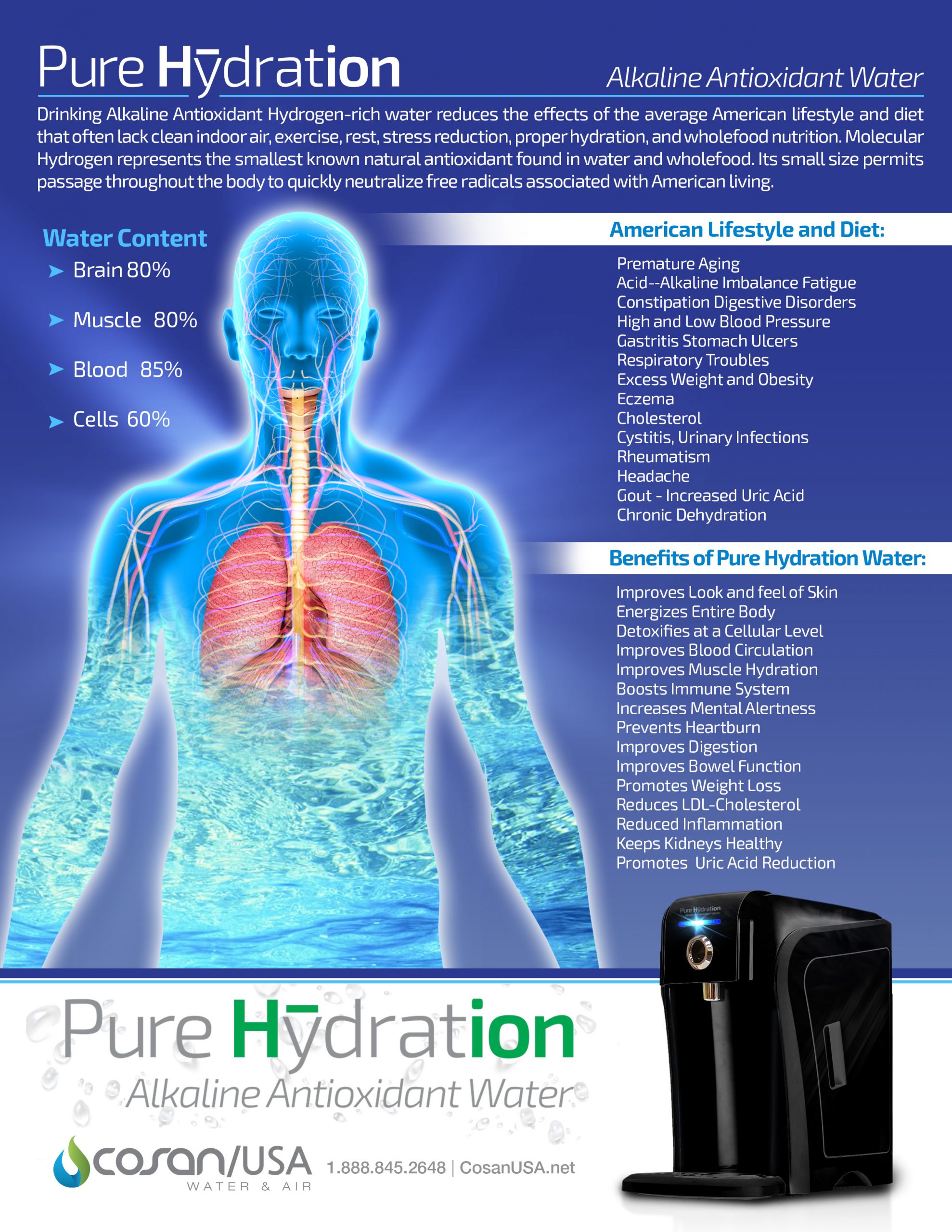 We also need electrolytes, (trace minerals) for the water to energetically work correctly and to conduct electricity in the body. Many, if not all conventional water filtering systems remove the minerals. Water  bottled in plastic spurs environmental concerns and can contain carcinogenic chemicals from the bottling process as well as out gassing from plastic bottles.

Dr Pollack is a top water research scientist and author of the ground breaking book, “The Fourth Phase of Water: Beyond Solid, Liquid, and Vapor”. It explains the importance of living, structured water, which he calls ‘exclusion zone‘ (EZ) water. This water is H302, rather than H20 which he refers to as bulk water. EZ water is negatively ionized charged water which acts as an antioxidant in the body, holding and delivering energy to the cells. Energized structured pure water is necessary for optimal hydration, pH, assimilation, metabolism and to support the body’s ability to detox.

Dr. Bush has been working with a ‘State of the Art’ technology called ‘Phase Angle Analysis’. It measures the intracellualar hydration and conductivity of the body, which is considered a strong indicator of health and longevity.

Most people are becoming aware of how pH is a major factor in aging and inflammation. pH is the potential of hydrogen.

According to Dr. Zach Bush, water is the main carrier of hydrogen and oxygen into the cells, which are highly antioxidant and anti-aging. Structured water has molecular hydrogen that is a very strong antioxidant and anti- inflammatory, and enables the mitochondria to create the energy needed for cellular repair and replacement of damaged cells. Typical tap water and much of the filtered water is positively charged, and have unstable hydrogen that acts as an oxidant to the body, causing free radical damage and inflammation.

Energized / structured water being very antioxidant and alkalizing, is very important for optimal health and longevity. Fresh spring water, from a clean source is what I consider the best water to drink and bathe in. The major benefits tend to dissipate fairly quickly, so one would need to get the water every few days. But this is not possible for most of us.

After studying water and talking to experts for years, I have found what I believe is the best solution
to create your own ‘energized, structured, mineralized water’.

How To Create Your Own Structured Water

Cindy has a warm and gentle demeanor, and was very effective in assisting me quickly back to wonderful health. I would recommend anyone with health issues who wants to follow a holistic, natural path towards recovery to contact Cindy.

I am so glad I found this place, I would highly recommend. Cindy was very nice and knowledgeable. I feel so much better thank you!

I made an appointment with Cindy because of the intriguing information I had heard about the AmpCoil.  After completing two rounds with the Ampcoil, I am convinced that it has helped me on all levels of my being. I am impressed with Cindy’s thorough assessments and careful record keeping. Her calm, kind demeanor and generous spirit combined with her fountain of health care information make sessions with her truly life enhancing.
Anne H. - Asheville, NC

Cindy's knowledge and compassion combine to make her an extraordinary healer. She's helped me with physical and mental health issues, and continues to be an amazing resource as I progress on my healing journey. She's knowledgeable on nutrition, herbs, Yoga, and so many more modalities I've only begun to explore.

I have been working with Cindy for several months. Her knowledge and passion for her work is expressed in her interaction with her clients. My health issues were not serious; however, I have had significant improvement with my digestion and sleep issues. I have also worked with the Ampcoil and highly recommend this modality.

Cindy Graham is an empathetic, caring, passionate, and fascinating natural health practitioner. She practices a variety of modalities, from herbalism, muscle testing, Iridology, dietary and lifestyle counseling, and an assortment of high tech healing devices. Not only that but she makes you feel safe and cared for. I highly recommend Cindy.

Ready to Make a Change?

Schedule a free consultation with Cindy today and find the support you need to realize a new life!